Beerhouse is proud to announce that we will be hosting a very popular and exciting monthly event to coincide with Cape Towns First Thursdays cultural exploration. We present Cape Town’s most eclectic platform for spoken word and live music! 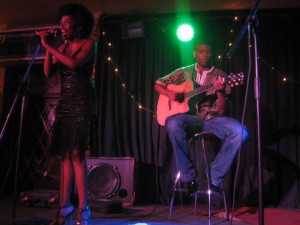 Verses started off in 2004 and ran for seven years before taking a bit of a break, but now it’s back and promises to be just as entertaining and inspiring as before. Each event features a poet/spoken word artist, a live band/musician and an incredibly popular open mic session. The latter often enjoys spontaneous collaborations and it’s not unusual to see a poet jamming with a guitarist who is backed by a human beat box.

Nicole Biondi, Verses founder and Cape Town-born spoken word artist says: “People are never quite sure of what to expect when first coming to Verses and are filled with nervous thoughts of high school poetry running through their minds coupled with a slight unease at the unknown. However, within the first half an hour without failure, I’ll look around and see nothing but happily entertained faces and quite often, awe!”

Join Nicole and the Verses crew on Thursday 5th June  and celebrate the return of the Verses Spoken Word and Live Music Sessions. The event is free to attend and and the stage opens from 8pm till 11pm.

There are still slots available in the open mic session and interested performers are welcome to email Nicole at ms.nicolebiondi@gmail.com to sign up or alternatively simply arrive early and sign up on the night. 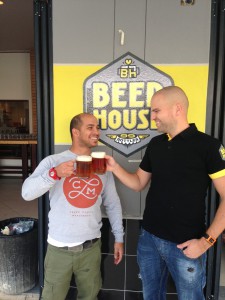 On Thursday 15th May we had a Roof Wetting Party for Beerhouse Fourways. We had a party on site before we start construction on the new Beerhouse. Influential Jozi beer people, media, suppliers, builders,  potential investors, new neighbours, friends and family made up a jolly group of beer lovers. Traditionally a roof wetting function or ritual involves wetting of the actual roof. This is done to check that the new roof is properly sealed off from the elements. At our roof wetting we did more of an internal wetting and stress test to the liver, as the building is already built and we just wanted to celebrate once before we begin the re-building and shopfitting of our premises.

Beer suppliers and Breweries were very forthcoming with donations of delicious beer. A short presentation on the Beerhouse concept and what we aim to achieve was followed by a beautifully cooked lamb spit roast. Our guest really took our Beerhouse building site and there is a lot of enthusiasm towards us setting up a house full of beer in Jozi.

A big thank you to the following for supplying beer for the event – Craft Liquor Merchants, The Tap Room, Bavaria, Drayman’s Brewery, Loxton Lager, Brewhogs and Urthel

Sadly we have to close the doors again after the party and get our overalls on and load up with some elbow grease and get stuck into transforming the site into a beautiful experience of the senses. We cant wait to open and share our love for beer with everyone in the place of gold.

Until then Stay Thirsty/ Stay Curious. 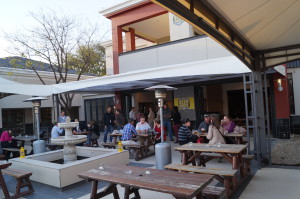 Our lovely outside terrace. 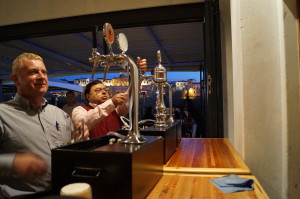 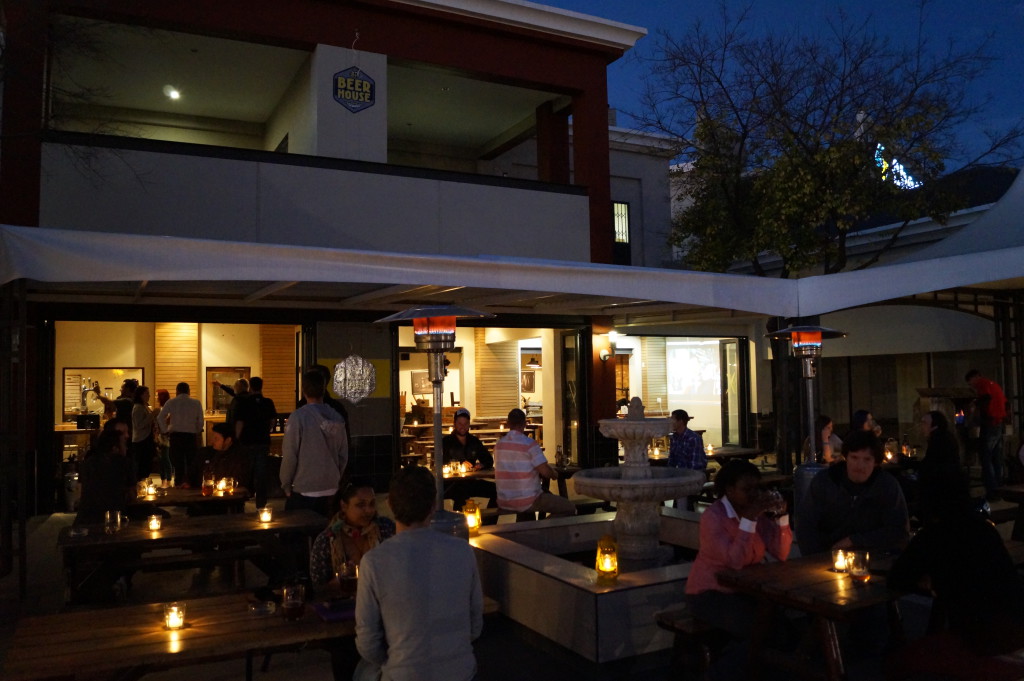 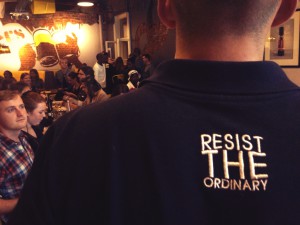 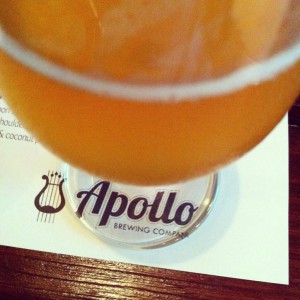 We are delighted to present our new Beer menu. We have been working on it for sometime with the intention of making it easier for the beer lover to find that perfect beer.

Although our #99bottle menu was ground breaking we were not entirely satisfied. With our huge variety of styles we needed to create a navigational tool to guide our beer lovers through their inherent cognitive understanding of taste. So we created a Taste Hexagon as an index of flavours such as Light and sweet, bitter, roasty,  complex and heavy and fruity linked to styles of beer such as Weiss, Pale Ale, Porter, Tripel and fruit ales. This allows the beer lover to make an informed decision and discover the beer they were always looking for.

We have now got 15 permanent taps of tried and tested beers that have become firm favourites over the last 9 months. There will be 5 guest taps from experimental local and international breweries such as Triggerfish, Brewdog, Rogue, Lakeside and Devil’s Peak.

Our popular tasting boards, Explorer, Hop Head and Beer ‘Clock still remain as well as our imported 5l table kegs. In addition to all this great beer we also have a brand new selection of Rare and Limited Bottles. We will have limited edition bottles, one off’s, exclusives and rare bottles that will come and go as quickly as you drink them.

To celebrate our new menu we will be featuring one of our new beers on Social Media for the next week accompanied with a catchphrase in bold. if you use this catch phrase you can win that beer. One beer per day! Keep your eyes peeled on Twitter and Facebook to win free beer. 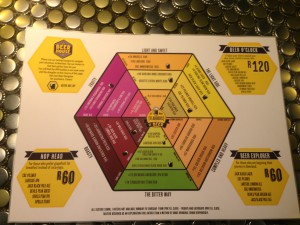 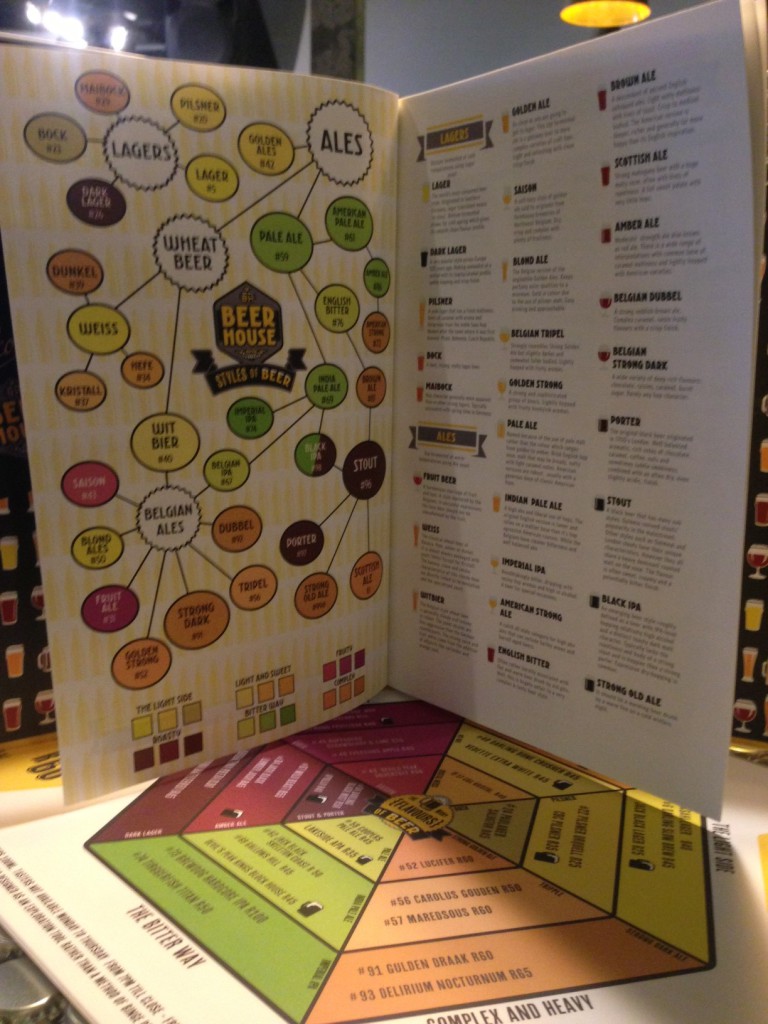 The Beerhouse is expanding! We now take our #99 bottles concept to Jozi and open in Fourways. After searching long and hard for a venue we now turn our attention to recruiting the best beer-loving staff.

We are looking to recruit a General Manager, Head Chef and Admin Assistant for our soon to be opened Jozi Beerhouse. We looking for people who are career minded, strong work ethic, creativity and the highest professional standards. In return you will be afforded the opportunity to work in a growing company with focus on personal development and spreading the good gospel of Beer.

If you know any super star staff, refer them and if they are successful you will be rewarded with a R500 voucher for Beerhouse Jozi. Please send CV’s to join@beerhouse.co.za and fill out below on-line questionnaires. Please see duties and key competencies required for the below positions

Beerhouse Staff at Devils Peak Brewery for one of our Staff Days out.