#CraftBeerPriceMustFall: How pricing works for the hospitality industry.

So Rhodes and the fees haven fallen so what about the latest campaign #CraftBeerPriceMustFall ?  Fellow revolutionary Apiwe Nxusani-Mawela, Brewster and beer lover has responded from a brewing point of view.

Her blog was driven by observations of ‘crazy’ prices charged for craft* beer. I too have witnessed some ludicrous prices charged for beer at certain establishments and I too would rather drink something else, like wine. Ooooh Wine! The Beer whisperer drinks wine? That I do and I rather like it.

I will now attempt to respond from the hospitality point of view to the increasing calls for prices to be checked. I can’t vouch for everyone and I know that many outlets get it wrong. Remember that three years ago paying over R25 for a 500ml would have been unheard of. Then the revolution came. Old battle- worn microbreweries like Mitchell’s were meandering. Then came new players that took beer from the hands of the boep and braai fraternity and into the hands of the youth through modern marketing tactics and a very different product. Brewers & Union, Jack Black and Darling Brew made beer desirable and sexy. They opened our eyes, minds and taste buds to a new experience which led to further exploration and education. Suddenly we were buying beer for R30 then R40 and, oh my, I purchased a beer for R550 the other day.  And yes, it was worth it!  Every single sip of the 500ml bottle was savoured like the finest wine.

So people are more inclined to part with R45 for a pint thanks to the revolutionaries. So where does that R45 go? I am not a financial guru but I do sit in management accounts meetings at Beer Revolution HQ and have become very familiar with the ‘Game of Margins’ over the last few years.

It’s a common misconception that hospitality outlets are greedy and that their mark-ups are ridiculous. This can be said for some, but I will come to the defence of the majority that play the margins game honestly and within market-accepted playing field.

Here is my breakdown of what a R45 500ml serving of beer consists of for a hospitality outlet**: 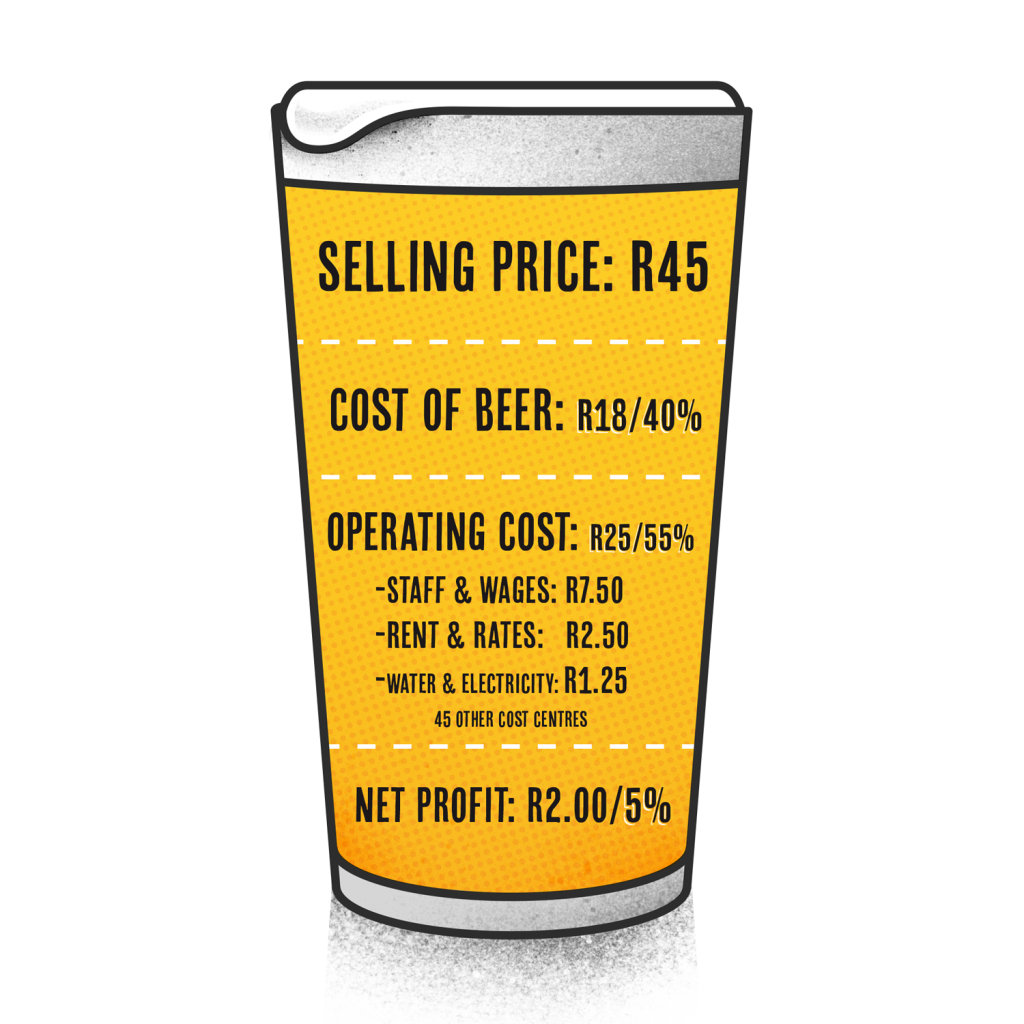 The pie seems large but for a beer to come from brewery to belly its takes a lot. One of the great things about our revolution is that it is human resource heavy and provides a great number of jobs. The two Beerhouse’s alone are employing over a hundred people whose lives have been enriched. Operating cost for retail outlets like Beerhouse are numerous. Staff wages, rent and utilities are the biggest contributors. Then you have about 45 other smaller operating cost centres including monthly costs of R15 000 on cleaning and hygiene materials, R20 000 on banking fees and R25 000 for bar supplies (glassware, napkins, etc), and it does not stop with maintenance, marketing, training, printing, accounting fees, wastage, entertainment, licenses, communication, insurance, etc. It all stacks up but is essential to us operating an enhanced experience and proper curatorship of beer.

Essentially beer is about small profit margins. The only way to go laughing to the bank is to do big volumes. The biggest threat to the laughing is an inability to produce volume and therefore playing the ‘Economies of Scale’ game that makes Macro breweries giggle on the way to the bank.

Brewers and retail must team up to create, curate and maintain this route to market. Charge fair prices that allow growth for both partners and always make sure the product is served at optimum condition so that our revolution may recruit many more beer lovers. Those who only think of short-term profiteering will inevitably fall by the wayside as beer lovers will not tolerate being taken for a ride while retailers laugh. They will talk with their feet and perhaps even drink wine.

* my thoughts on the term craft beer

** I refer here to on-consumption restaurants and bars and not to off-consumption bottle stores.

4 Comments On “#CraftBeerPriceMustFall: How pricing works for the hospitality industry.”