One late night 2 years ago…

After only 8 months of trading it is clear, that not only the media, but specially our guests love our Beerhouse and it is getting clear, the Beerhouse is here to stay and grow with the first Beerhouse in Johannesburg about to open.

We are very happy with our baby, that opened August 2nd 2013 and we’d like to share, how the idea of Beerhouse started during a trip to Germany: 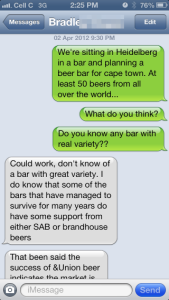 Other than Babies, the Beerhouse concept took a solid 16 months from conception to birth. It was exactly two years ago on April 2nd, 2012, that my (then pregnant) girlfriend Varnia and me were sitting in a beer bar in Heidelberg, discussing the various available Beers and their stories and wondering why no similar place exists in Cape Town. Quick market research through text messages and Facebook followed and we realised, that there might indeed be a gap in the South African market.

Thanks to the pregnancy, we went back to the hotel quite early that evening and I reserved the most obvious domain name beerbar.co.za, created a brand new Facebook page, invited Capetonian friends and started posting, before going to bed.

I couldn’t be bothered to work on the Beerbar idea when we returned from our Eurotrip, as pregnancy and my OMClub party took up all my time, but I did notice the friends congratulating me on our new bar business. 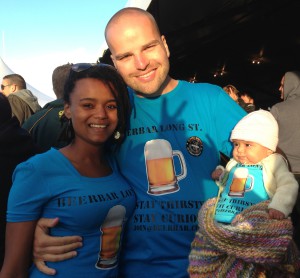 Beerhouse Team at the CT Festival of Beer 2012: Varnia, Randolf and baby Eliza. Not in the picture: Jane

Just a few days after the birth of our daughter it happened: Varnias uncle told us, that some of his rugby mates asked him, ‘whether he heard about these mavericks, that were planning to open a beer bar with more than 40 different beers’ and they mentioned my name. Beer blogger Joakim had written about us, although we had no location, no experience in the hospitality industry – we did nothing, but promise beer variety…

I slowly realized what we’ve done: it wasn’t only friends & family, that liked our idea. We had planted an idea into peoples mind and they actually really wanted a beerbar with 40+ different beers! We finally started to seriously turn a drunk crackpot idea into a business.

Even without any experience in the industry, it is obvious, that a successful bar business starts with a good location and Long Street is where it’s at. After looking at smaller available vacancies, we finally called the ‘Restaurant space to let’ number, that we walked past so many times and found a fascinating venue we knew would work.

Few days after signing the contract for 223 Long Street we still had no real idea how to open a bar, but were ready to spread the word. We printed blue Beerbar T-Shirts and visited the Cape Town Festival of Beer, where we met all the brewers, that are now our best partners for the first time and we also found our vision: give our guests at the Beerhouse a 365 day a year beer festival experience and be the tasting room for the South African craft beer industry. 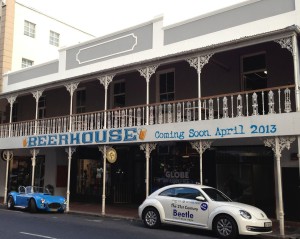 With the new name finalised we decided to not wait for a logo and the Artads artists painted the name, two beer mugs and the opening soon message on the building, that would stay visible way past the April due date we originally anticipated. We invited all our new beer loving friends to the Beerhouse fundraising & christening party and were able to collect more than R5000 in donations for Baphumelele, Stormont Madubela Primary School and the Butterfly Art Project thanks to the support by United dutch Breweries, Keg King, Rob Heyns & Roeland Liquors.

With all this exciting momentum, we launched into 2013, knowing that a family-team together with relentless Jane, wouldn’t be able to do it all themselves and would need to grow. Once again fortune was in our favour and Murray joined us after just returning to Cape Town from a career and his own restaurant in London… 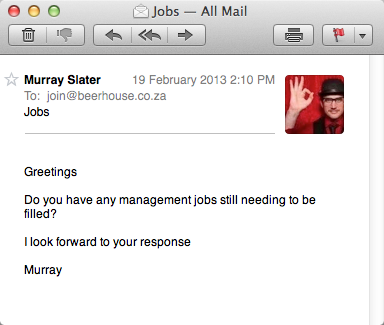 and the rest is history… 😉