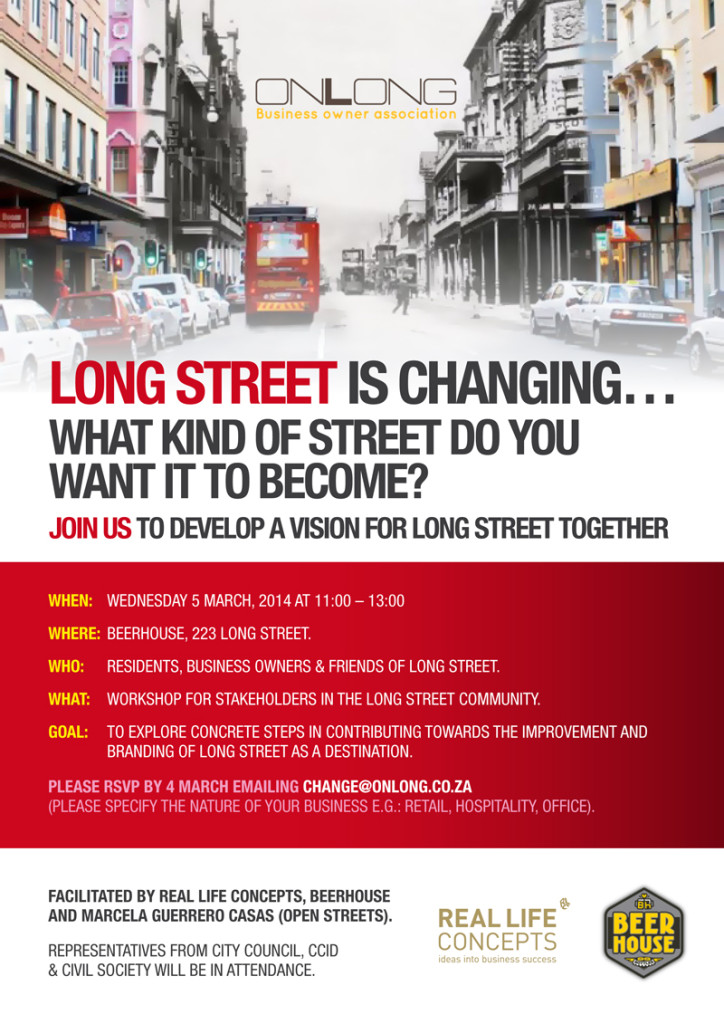 On 27 February 2014, a group of residents, business owners and representatives from the City Council came together for the first of a series of workshops aiming to develop a community-led vision for Long Street. Indeed the street is changing and everyone seems to hold an opinion of how Long Street should change.

On that day, the room filled up quickly and the workshop got underway punctually at 17:30. It started with an ice-breaker in which everyone was asked to ‘leave their jacket outside’ and strive not to represent their business but rather engage as individuals contributing ideas to a greater good, a greater Long Street. Everyone went around the room introducing themselves by name but refraining from identifying with a particular ‘outfit’ so that participation would be framed by individual ideas rather than businesses with a particular agenda.

Facilitators from Real Life Concepts engaged the group in an exercise to identify a common Identity (what everyone thought Long Street stood for), Image (how people thought the street was perceived by others )and Vision (what the group would like to see Long Street becoming). Interestingly and contrary to what most expected, safety was only prioritised in terms of perception (image) but it was the element of “people” that stood out both in the discussion about identity and that of vision. In other words, the group largely agreed that any changes to the street should ensure the human element in terms of diversity was maintained while security and safety should be improved not through heavy policing but rather through mechanisms that invited more people to populate the street and thus create a feeling of safety.

The discussion was rich and Real Life Concepts is working to put together a report that outlines the main components of that discussion; in the meanwhile, it is worth nothing that ideas on concrete activations were put in place. They included training for security personnel; cleaning sessions with residents; temporary closure of the street, street lighting and Christmas lights, the integration of side streets; more landscaping, putting up flags to distinguish the street, and traffic calming measures amongst others.

We would like to thank the Southern Sun Cape Sun on Strand Street for providing us with meeting facilities for the workshop on the 27th February.

The second workshop will take place on Wednesday 5 March at 11:00 and a different group of stakeholders will undergo the same exercise, please contact change@onlong.co.za if you would like to take part.